Now the World’s #1 Web Server, NGINX Looks Forward to an Even Brighter Future Last month, NGINX passed a major milestone. W3Techs announced that after many years of steady growth in market share, NGINX is now the most popular web server in the world, edging out Apache HTTP Server. Of course we’re thrilled to be recognized for our years of innovation and hard work, but even more than that we’re profoundly grateful to you, the members of the NGINX community, who’ve brought us to this milestone by trusting us to secure and deliver your websites and apps. 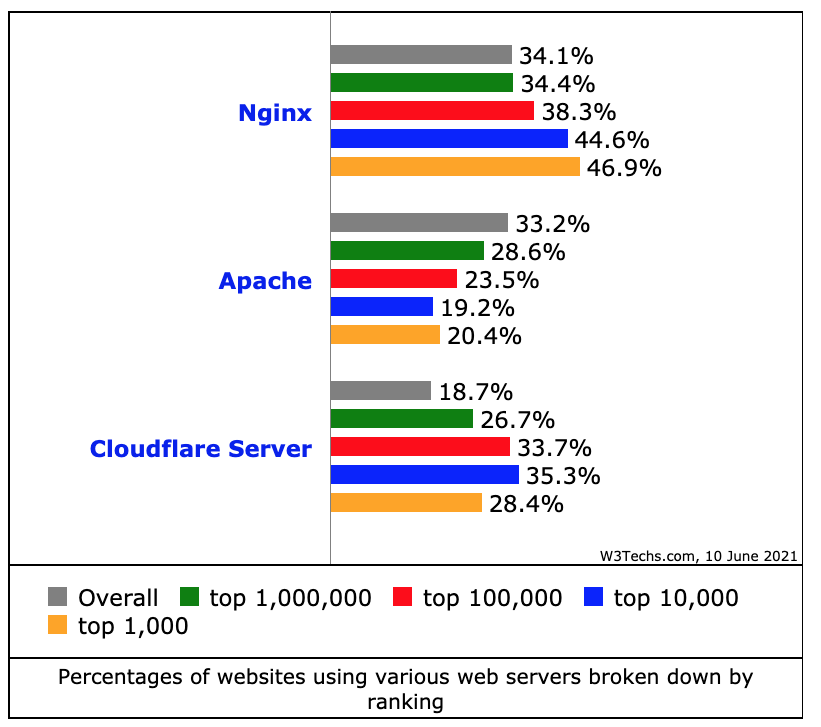 But by no means do we consider reaching this milestone a reason to stop and rest. It’s a booster shot, energizing us to come up with even more tools you can use to deliver the outstanding digital experiences your users expect.

The History and Evolution of NGINX

The original motivation for creating NGINX wasn’t nearly so grand. Back in 2001, NGINX’s original creator Igor Sysoev was trying to solve a problem at work – his web servers were having trouble keeping up with ever‑increasing numbers of requests. The challenge was referred to at the time as the C10K problem – handling 10,000 simultaneous client connections to clients.

Inspired by the design of Unix and other classic distributed systems, Igor developed an event‑driven architecture that is so lightweight, scalable, and powerful it’s still at the heart of NGINX today. Knowing he was onto something with the potential to help other websites, he open sourced NGINX in 2004.

As detailed in this infographic, community contributions and adoption continued apace, leading to the founding of NGINX, Inc. in 2011. Fall 2014 saw the debut of NGINX Plus, built on NGINX Open Source and enhanced with production‑grade features and commercial support for enterprise customers.

Revenues from NGINX Plus enabled us to expand our staff over the following years and continue development of both the open source and commercial models. In 2019 F5, the industry’s leading vendor of hardware‑based security appliances and application delivery controllers (ADCs), acquired NGINX to spearhead the company’s expansion into modern and cloud‑native application environments.

As adoption of microservices, APIs, and Kubernetes has accelerated over the past few years, our community and customers have called on us for help in leveraging the new technologies and taming the complexity that can result. We’ve responded with tools like NGINX Unit for dynamic, polyglot application serving, and NGINX Ingress Controller and NGINX Service Mesh for secured management of traffic into and within Kubernetes‑based container environments. Our future lies firmly in this world of container orchestration and management and delivery of cloud‑native applications.

A Modular Architecture Has Served Us Well

NGINX’s event‑driven, modular, and highly parallelized architecture initially enabled developers and website owners to move more packets, more quickly and with greater flexibility, on the servers they already had.

The NGINX community has consistently recognized the broad possibilities of this design – sometimes ahead of us at NGINX. They quickly realized NGINX can do a lot more than serve web pages. Without any prompting or documentation or guidance, novel use cases emerged. Enthusiastic users developed hundreds of modules to extend NGINX functionality (more than 150 and counting). Some in the community started using NGINX as an API gateway. Others linked NGINX servers together for load balancing of Apache and NGINX web servers. Many saw NGINX Open Source as an ideal Ingress controller for Kubernetes, a use case so promising we built and open sourced our own Ingress Controller.

Building Roadmap and a Future With Community Help

We took all of this community activity as invaluable guidance about the additional capabilities our users wanted most. It’s no exaggeration to say that the NGINX community has been by far our best source of inspiration for product innovation. We’ve plowed the revenues from our continually growing commercial customer base back into ongoing development of commercial and open source offerings alike.

Over the years we have also watched our community evolve. We started out serving startups in the early days of cloud computing. As the community that’s developing and deploying modern and cloud‑native apps has grown, we’ve grown along with it and are now a trusted partner with all of the major cloud vendors and some of the world’s largest enterprises across many industries. The NGINX community today ranges from one‑person startups to the world’s largest technology companies like Adobe.

What we love is that even within those large companies, we often see developers using our open source software in their personal sandboxes while the corporate security and platform ops teams rely on our commercial products – NGINX Plus, NGINX Controller, and NGINX App Protect, among others – to deliver mission‑critical SaaS products and complicated modern web apps with millions of paying customers.

NGINX Open Source always has been and remains the core of our product offerings, and we are proud and happy that so many developers trust and rely on it. At the same time, our commercial products with augmented scalability, security, and management features deliver the higher‑end capabilities that enterprises need.

Effectively meeting the needs and wants of our open source community while also growing our revenues and building compelling enterprise products is a constant balancing act. I joined NGINX a number of years ago when the company had fewer than 100 people. Today the NGINX Product Group at F5 stands at over 250 people and growing, with hundreds more supporting the product group across business functions in F5. Even as our market share, product line, and user base has grown, one of the things I love is that NGINX remains the same scrappy upstart at heart. We don’t take our success for granted, and we love doing the little things that make the big things possible.

We value our community just as much today as we did a decade ago. It is the source of our strength as a company and our path to future growth. Thanks for making us the #1 server of websites and apps, and stay tuned as we roll out more products and possibilities in the near future.

Want to try out our enterprise‑grade solutions for yourself? Free 30-day trials are available for all of them:

Or get started with free and open source offerings:

The post Now the World’s #1 Web Server, NGINX Looks Forward to an Even Brighter Future appeared first on NGINX.